Hurricane Sandy did a number on my house: the largest tree in my woods fell on it costing my insurance approximately $200,000 in damages.  I want to thank and recommend Erie Insurance for being so concerned about me and my place; they couldn't have been better to deal with nor more accommodating.
I also want to thank Stellar Construction and, in particular, Tony Stellar, for his and his crew's timely response, as well as Brian, the general contractor lining up all the sub-contractors and workers in a timely manner, from taking the tulip polar tree off the house and getting the second story re-framed, roofed, shingled, dry walled, and spackled.   Dave is upstairs right now putting on the second coat of spackle on the ceilings over three bedrooms, the bath, and the staircase.  Yep, the tree caved in my whole upper story.

As if the hurricane hadn't caused enough misery, my favorite cat, Evelyn--Evie--suddenly went missing.  Evie is my feline house companion and has kept me company on many a lonely night.  She also watches "Family Guy," "Wipeout," and "Impractical Jokers," an absolutely hysterical show on Tru TV, with me in bed nearly every night.

Two days ago I had last seen Evie looking at me, her eyes wide, from the living room.  Evie is a shy girl, and silly and not-so-silly things scare her.  She is like a lot of us humans: when we get upset, we often don't use our heads.  Seeing all these strangers in her house and hearing them hammering, yelling, and spraying insulation into the second story must've sent her off her little feline rocker.  Late that evening when I noticed her absence, I called through the house: no Evie.  Perhaps, I thought, she had run outside as the men were carrying in the dry wall.  I had had to close the doors several times after them, so the distinct possibility existed that she could have escaped to the outside.  I called outside, but she didn't come.  I still thought that she was hiding somewhere in the house, but if she was outside, I hoped she would find a half-decently warm place--perhaps the barn--to spend the night and come back in the morning.

The next day I checked all the rooms and closets in the house: she was nowhere inside.  So, I began my search outdoors.  I trekked through the woods, the nearby fields, down to the barn across the street, and down to the neighboring woods: no Evie.  During my search, I imagined all kinds of  horrific things happening to my favorite cat: coyotes got her, she struggled in a trap, she ran and became lost in the hundreds of acres of fields surrounding my woods.  The horrific images crawled through my head like a nasty ticker tape.  By the end of the day, I was exhausted, having checked everywhere imaginable, including the basement for the fourth time.  One thing I knew for sure: she wasn't in the house, and she wasn't in my woods.

My little friend Evie was gone.

Last night the space on the bed comforter where Evie belonged was eerily empty.  Tears dribbled down my face as I imagined life without my black long-haired buddy.  This morning I dressed and went downstairs, opening the front door to the deck where, when Evie tired of playing outdoors, she always stood ready to come inside.  No Evie.  I called, and a few other barn cats ran to the door, but Evie wasn't among them.

Later this morning while Dave the spackler was spreading his stuff on the dry wall, he overheard my telling my agent and publisher about losing my best friend: my cat was missing and feared dead.  When I got off the phone, he mentioned that yesterday the dry wallers said they saw a cat run into the access hole leading to the crawl space above the dining and living room.  They had meant to tell me but forgot.  I ran upstairs, pried open the hole, and Dave shown his light around the sea of white insulation which they had re-sprayed yesterday.

There, in a far corner, two black ears peeked out of the insulation.  They belonged to Evie!

Dave tried to hold me back from going right in there and trampling down the insulation to get to her.  He recommended I let the access door open in the hope that she would eventually come out.  But I knew she was scared, and while I had her in sight, I wanted to get her before she disappeared again.  But this time I listened to the advice--sort of.  I leaned into the attic space covered with the ocean of insulation and called softly to my feline friend.  After several minutes of coaxing and rattling a cat food can, she began to walk along the back edge of the attic space.  In another moment I had her in my arms.  I guess she wondered why I was hugging her so tightly.

Then I brought her downstairs, fed and watered her, and she walked calmly away, cottony insulation clinging to her shiny black fur.

I was so happy I didn't know what to do with myself.  For sure I thought she was dead, hung up in an awful animal trap or eaten by a pack of coyotes.  I had had my most precious Christmas gift delivered early, for sure.  And, then, as I got used to the idea of having my Evie back home safely with me, I thought about the horrible death she would have suffered had Dave the spackler not told me about the dry wallers' conversation yesterday.  She would have starved to death up there: cold, without water or food, locked and withering away in that crawl space--one long day after long day and one long night after long night.

Thank goodness a Christmas angel was watching over Evie. 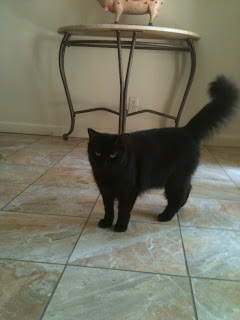 Merry Christmas, everyone!
Posted by Gay L. Balliet at 12:20 PM No comments: