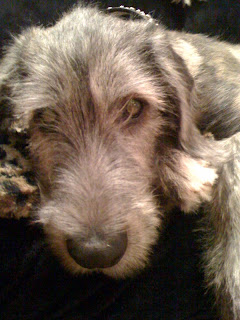 I've buried yet another cat this morning. Holly Berry, a probable drop-off several years ago, came to our farm scared of the world and people. I had discovered her staked out in the garage hiding, alternately, under the Rover and Edgar's vet truck. In the beginning, I caught mere glimpses of her retreating hind end; she was, at least, partially feral, or had been badly treated by humans. Despite what must have been lousy experiences with the human race, she attempted to communicate with me. Every time I went outside, which is primarily through the garage, a loud "meow" sounded. Understanding cat language as well as I do, I knew she was testing me out--to see whether I'd respond in like fashion to her conversation. So, I hunched down and meowed back. She talked; I talked. Holly howled; I howled. In a short time, I transitioned to English, which she obviously didn't understand, so I howled in the voice she was accustomed to, only yelling in words.
"WHA-A-AT'S THE MA-A-ATER? WHA-A-AT ARE YOU HOLLARI-I-I-ING ABOUT? YOU'RE ALWAYS HOLLARI-I-I-ING!" I called to the little gray and white cat.
Then she replied in an equally loud voice from her hiding place beneath the truck, "RE-O-O-OW!! RE-O-O-OW! RE-O-O-OW!"
Eventually, through mutual conversation and food offerings, Holly, named after her "hollaring" talent, became a good friend. At Christmas I added "Berry" to her name, just for the hell of it, and "Holly Berry" stuck, then, for the rest of the seasons.
The garage was her home, and I had a cat apartment readied for her to escape the wind and cold. One early spring morning after Edgar had left on his veterinary calls, I rushed through the garage toward the barn where chores awaited. I didn't hear or see Holly--strange. Holly was always in the garage--it was her home. This day, however, she was visibly and audibly absent. I looked up into the rafters, under the Rover, inside the cat apartment. I called and hollared, "HOLLY!" until I was blue. No Holly. Then I searched just beyond the garage: in the gardens, in the barn--everywhere. No Holly. I was worried, but I had had other barn cats that would take a vacation for a few days, though Holly had never left her garage before this.
In the evening Edgar came home, and we began to feed everyone. Suddenly, there sat Holly, awaiting supper, in the garage.
"HOLLY!" I hollared.
"RE-O-O-O-OW!" she yelled back.
No other explanation existed for her garage-absence for an entire day other than she had crawled up underneath Edgar's truck during the night or early morning and had ridden along on all his vet calls in the undercarriage, perhaps where the spare tire hung. And when Edgar pulled into the garage, she knew she was home and hopped down. I broached the subject to Edgar, who laughed and said that he had been flying at seventy mph on 78, and that she had to have been freezing under there going at that speed.
So, Holly Berry, in her short lifetime, was well-traveled, at least for a day.
Holly Berry remained a shy, vocal cat for the next couple of years, but when I rescued two mother kittens and their babies from a Philadelphia kill-shelter this spring, she gravitated to the barn loft. And even though I fed wet food, supplied free-choice dry, and water up there, Holly didn't thrive. We'd talk when I brought her and the other "loft" cats dinner, but she just didn't seem as happy. It as her choice to abandon her garage; I didn't force her into the barn, though the barn loft, with its bales of stacked hay, was inviting to a cat.
Then, a few days ago Holly Berry walked over to me as I was feeding the cats in the barn. She said in a feeble voice, "Ow, . . . ow." I knew something was really wrong and scooped her in my arms and ran to the house.
"Her gums are almost white," I said. She was having trouble breathing, her chest heaving with each breath.
"Yeah. They are really blanched," Edgar said.
"Leukemia?" I said.
"Good chance. I thought we tested her, and I know she's vaccinated," he said. "Well, let's give her fluids, put her on antibiotics, and hope for the best."
But hope neither did her nor us any good. The evening before she died, I held her, talked to her, and she nudged my hand. She was comfortable--for being that close to death. I told her how much she meant to me, and she meowed in a frail voice the same to me.
And this morning she was gone--my Holly Berry.
Posted by Gay L. Balliet at 9:39 AM 3 comments: 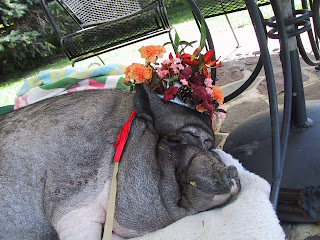 Pig Placement Network needs loads of votes in the Animal Rescue Site Challenge with Petfinder.com. to win a sizeable amount of money, which is all going toward pot-bellied pig medical research. Those of you following and participating in Luke Robinson's fight against canine and pet cancer research can fully appreciate that pot-bellies are also plagued by cancer. Pig Placement Network has been involved with several universities studying pet pig liver cancer--a pig's nemesis. I also introduced Luke Robinson to Susan Magidson, the key figure in the fight against pot-belly pig cancers, so that, together, they and the universities can pull their research. If you have a pet with cancer, know that these two groups, 2 Million Dogs and Pig Placement Network are working to discover causes of and treatments for the disease, and know, thereby, that their work always helps humans, as well. Please vote each day for PPN in this contest: Click on http://www.theanimalrescuesite.com/clickToGive/sheltershallenge.faces?siteId=3. This contest runs everyday, starting today, until March 20. Thanks for your time; I know it's precious. 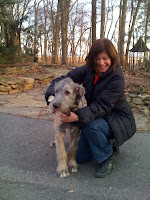 Stewie, at four months of age and at 63 pounds, has commandeered the household. When I crash onto the sofa in the evening, newly bathed and moisturized in anticipation of a new "Bones" show, the dog races, eighty miles an hour, into my lap, his spiney-white teeth gaping from a maw targeting my cheese snack. In seconds the hairy tank commandeers my sofa-sanctuary and my food, which rolls helplessly onto the carpet where it picks up the latest cat hair. Then he pounces on it, gives it a couple of bites, and it's down the hatch.
I'm furious in my helplessness. No canine should expect to confiscate my property without a fight; however, my only defense is to leap to my feet brandishing my index finger-gun accompanied by the "rat-tat-tatting" of a few choice word-weapons. "NO!!! OFF!!! STEWIE, . . .NO!!!!" But Stewie is a stalwart force--as determined as any infantryman with new boots from LL Bean--and his motivation is fierce: he's a hungry puppy and seizing my Velveeta is essential to his survival.
Within minutes of the attack, I am grounded--literally--curled up, whining, in a fetal position on the carpet while the victor reigns from the sofa with a smug mug. He burps cheese gas like Jabba the Hut, and I reach, in defeat, for a lap blanket to protect my naked legs. My empty bowels growl as I try to ignore the Stew King hovering over me, and my skin reacts in hives from the wool in the carpet. While our four-month-old puppy has won this battle, I have vowed not to lose the war.
Tomorrow night I'm going to bring out the big guns: cauliflower snacks.
Posted by Gay L. Balliet at 4:36 PM No comments: