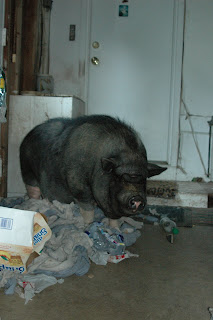 Surely visitors to our home would think us the penultimate slobs.
Though probably not much different from those of millions of homeowners in the United States, our garage, its walls stacked high with crates and bags of wet and dry cat food, rakes, shovels, buckets filled with various things, a working refrigerator filled with summer drinks, and three large cabinets loaded with cleaning fluids, brushes, and brooms, sports one feature that sets it apart from those other million Americans' garages: Skippy's nest.
There, sandwiched between the stoop that leads into the kitchen and a long, rectangular, homemade box with entry holes that I like to call the "cat apartment," lies Skippy's nest--a concoction of all things a pig can find that, together, he or she can call home. When Skippy's occupancy light is on, i.e. he's lying in the middle of his nest, a stranger to our home probably wouldn't think twice about the pile of debris upon which he sits. But when Skippy has had his afternoon nap and then waltzes off into the woods for some tasty morsel, he leaves his nest behind for all to observe and, probably, analyze in wonder or disgust.
Without the nest's tenant nearby, a non-acquaintance of ours would observe a bundle of junk heaped at least a foot high: old blankets torn to pieces, ripped-up empty cardboard crates that had stored soda cans, an empty cardboard Snapple holder in shreds, a bottle of diet Lipton Green Tea, an empty can of cat food, a feather duster that Skippy wrested from the utility cabinet, and, along with that, my plastic bucket for mopping floors, and a tangle of rags, too.
"What a bunch of slops live here," a stranger would think. "Why doesn't someone clean up this mess?"
What the stranger may not notice is that this pile of junk has been compiled out of keen deliberation and effort. Centered in the pile is a neat heap of straw and grass that Skippy had very carefully carried to his bed. Too, the edges of the junk pile are neatly arranged. Skippy's nest doesn't protrude underneath our cars or out the garage doors--for, then, it wouldn't really be a nest. A nest is contained--for the purpose of coziness, no doubt.
I once had the opportunity to watch Skippy building this nest in the garage. With much care and delicateness, he ripped an old blanket I had given him. Then, he nosed the pieces into submission, turning one piece with his nose--just so--and arranging the next one strategically next to it. Another day I saw him with a plastic bottle in his mouth. Evidently I had missed the recyclable can, and he retrieved the bottle: a treasure for his nest. I watched as he carried it in his mouth with the gingerness of a tight-rope walker, for he didn't want to drop it and possibly lose or shatter it on the way to the nest. Stepping lightly, he walked to his nest and placed it, after standing for a moment, thinking. Then, after a long pause, he moved it off to the right corner of the pile. In contemplation, he stepped into his nest, positioned himself just so, and prepared to take a nap.
We have cleaned the garage several times this summer already, sweeping out pebbles and grit that gets caught in our cars' tires. But I have given strict orders to Edgar, my housekeeper, and others who mean well to never disturb the pile of rags, plastic, paper, straw, and cardboard that is Skippy's special place.
"That's Skippy's nest," I say to all who stare and then question with crossed eyebrows. "It's his home, and I don't care how awful it looks. Skippy likes it, and that's all that matters. It stays here until he abandons it."
Skippy's nest is testament to what is important to me, too. Not only does Skippy's nest define him as the careful architect that he is, but it defines me, too, as a proponent of an animal's right to comfort and a need to find his own space in his world and make it his own.
Posted by Gay L. Balliet at 8:53 AM