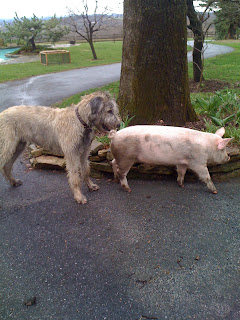 “We’ve got ourselves a convoy!” I imagined Stewie thinking as I glanced at the S-Team gearing up for more mischief.

Stevie, my four-month-old Yorkshire farm pig, galloped out of the barn with Stewie, my Irish wolfhound pup, right behind him--up the pig’s rear end, pawing his back, and play-biting his flag-ears.

What a couple of goofy bed-fellows I have in these two animals: one a scruffy-haired, kinda droopy-lipped sight-hound of seven months and his best pal and confidant, Stevie, a white, smooth-bristled, pig—each weighing close to a hundred pounds. The two inseparables, both in their youth and fascination with this world relatively new to both, crave the outdoors and all the curiosities it has to offer, from the spring grass-shoots to the grubs emerging from their winter sleep, from the cats lurking beneath each bush and guarding atop each tree limb, from the horses neighing in the pasture to my planting elephant ears in the gardens. Everything lures their curiosity.

Stevie is Stewie’s mentor. The other day I watched from the kitchen window as Stewie concentrated on Stevie’s rooting technique. With such intensity that I have never seen in my hound before, Stewie watched as Stevie plowed up the muddy back yard. Stewie must have been thinking, as he saw Stevie bury his face, up to his eyes, into the ground, “Hm-m-m-m, must be food underground. I want some too. Should I be helping?” Since Stewie is not used to plowing earth with his nose, he didn’t exactly know how to get at the treasure beneath the soil, but he was learning how to adjust for his lack of a snout roto-rooter.

I watched as Stewie analyzed Stevie’s nose-plowing methods, and then suddenly, Stewie’s ears perked, and he looked at the ground in front of him. He sniffed, looked at Stevie, whose eyes were the only part of his face visible (the rest being covered by mud), and began to dig furiously with his front paws. He scratched and threw the dirt through his hind legs. Ground flew four feet into the air, and all the while he gaged his success with Stevie’s. Stewie was digging faster and deeper than was Stevie, but Stewie didn’t know what he was digging for.

And I? Well, it wasn’t bad enough that Stevie was plowing six-inch ridges into my backyard. (Incidentally, I take pride in my landscape design and beautiful tropical-looking gardens. This activity wasn’t enhancing the outdoor décor.) The two were in league together, against me and my landscaping. If I didn’t stop the partners in crime, my yard would look like the work of an excavator gone toxic.

Out the door I flew, shouting, “Stevie! Stewie! Stop it!” Stewie looked up as if to say, “What’s bugging you?” but Stevie, so intent on his digging, paid me no attention. So, I tromped into the muddy hole behind him and began to push on his rump. It’s not easy trying to move a hundred pound cylinder on legs out of an enticing mudhole. After ten minutes of yelling and coaxing, and with my shoes Frankenstein-heavy with caked mud, Stevie finally walked off into the woods where he can root until he collapses, for all I care. My gardens, however, are off limits.

Stewie had stopped digging when he saw how upset I was. And when Stevie trotted off into the woods with Stewie close behind, I muttered to myself, “Yep, we got ourselves a convoy.”
Posted by Gay L. Balliet at 1:04 PM 2 comments: