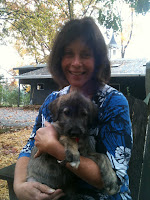 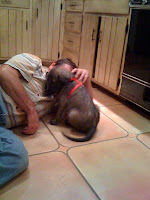 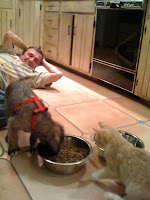 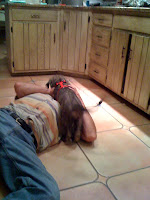 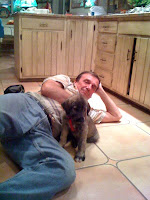 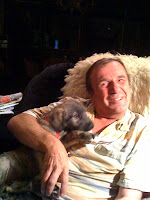 In a matter of a few hours, my life has been turned upside down because of a being who, himself, is lying upside down, fast asleep, in the kitchen. His name is Stewie, and he is my husband's combination Christmas and birthday present: a puppy. He doesn't look it yet, because he's only seven weeks old, but he's aspiring to be an Irish wolfhound.

This all came about while we were watching Animal Planet's "Dogs 101" a few weeks ago. Throughout the show, which included the Basenji, the Sheltie, and others, a ten minute segment featured the Irish wolfhound, a breed of dog that we had enjoyed twice before in our life together. Many years ago we had adopted our first IW, an Alpo research dog named Diane, and, after she died, we bought Abby from a local breeder. After Abby died, we didn't have a dog for probably fifteen years. I had my hands full with all my cats, horses, and a herd of pot-bellies. What would I want a dog for, right?

Well, when the Irish wolfhound segment of the show came on, I observed my husband. I have to admit that through the other featured dogs, he merely watched with interest, turning back to his magazine throughout. But when the IW came on, he began to smile like a jackass eating stickers--memories of our other two dogs flooding his brain, no doubt. That smile would spell trouble. For that segment he continued to smile like a fool. When he told me the next day he wanted an IW for his birthday, I headed to the Internet to look for a suitable IW companion. I tried rescue groups and Petfinder.com, and one IW was up for adoption but hated cats. I couldn't get that one. And there were no other IW's that needed rescuing. So, I turned to a breeder.

Stewie, named so after my favorite cartoon character from "Family Guy," arrived last night. Edgar prefers to call him Stuart Franklin for royalty's sake. When we picked him out of the car, we were shocked and pleased that he peed and pooed the moment his huge feet hit the ground, and we praised him grandly. In the house, he took to Edgar like a fly on manure, and soon they were both rolling around on the kitchen floor--our cats slinking past the dishwasher and wondering what kind of strange creature he was. After playing with him, feeding him, and taking him out for a final pee and poo (I much prefer the word "shit" but am trying to be politically correct here), we put him into his nicely bedded crate for the night.

Then all hell broke loose.

All alone in a crate in the corner of the room, Stewie began to howl and mewl in the most pitiful voice. My latent maternal instinct caused me to shoot up from the sofa and run to quiet his tears, but Edgar warned me to let him go--he'd soon stop. At the cacophony, the house cats flew into the garden room where they disappeared.

And the ghostly, baleful sounds from the kitchen continued: for sure the Halloween banshee had arrived early.

Edgar and I stared at each other. What should we do? We only knew rudimentary stuff about crating dogs. Were we doing it correctly? Should we continue to let him cry until he fell asleep? Did he need a night light? We only knew how to take care of kittens, cats, pigs, raccoons, and horses. This puppy was something fairly new to us, having gone through this fifteen years ago.

Finally, Edgar said, "Guess we need to go to bed so that he gives up. He hears the TV going and wants to be with us. Gotta go to bed." So, at eight o'clock--barely dusk--we turned off the television and the rest of the lights and headed upstairs serenaded by the sounds of Stewie's whimpers.

I don't think little Stewie slept much last night because he is sleeping now and already had two other naps this morning. In between naps, I take him out for his constitution, which, I might add, he's more knowledgable about than is Congress. When I bring him inside, he laps some water along with puppy kibble, which looks and smells about as tasteful as a pile of clumped sawdust; he pads around the kitchen, sniffs a brave cat, and tastes the floor. Then he retreats to his crate for another nap.

And, as I said, my life has turned upside down: not for this moment while I'm writing here, but in general, I suspect. My cats creep around as though they're waiting for a ghost to flitter past at any moment. Edgar is out on vet calls, but I feel as though I must be on-guard--ready to sweep the pup outside the moment he wakes up--before he shits-poos in front of the refrigerator. Likewise, last night he had already found the cats' self-feeder, so now that is up on the kitchen counter alongside a box of chocolate chip cookies. Already I'm planning for my doctor's appointment this afternoon. Do I change first then take him out for his peeing event? Do I take him out fifteen minutes or more before I leave to drive the half hour for the appointment? What if he doesn't pee in those fifteen minutes? Can a dog owner make a dog pee on command? Do I rub something to make him pee--his ear, his hindy? I could offer him a litter box and see what happens? Perhaps I should put him in the dog run we set up in the grassy area behind the house. My brain is rife with questions on puppy care. The easiest would be to just wait for Edgar to come home to do the potty thing.

Now that's a good idea. Afterall, Stewie is Edgar's puppy. If he wants to share a puppy's love, he should share some of the chaos, too, right?

Stay tuned for more on the continuing Saga of Stewie.