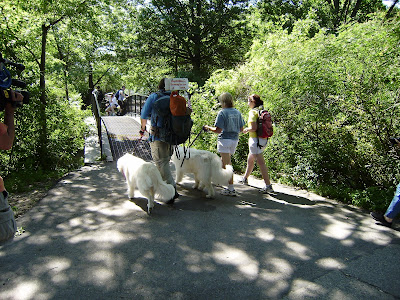 This is a pic of Luke Robinson walking his Great Pyrenees through Boston Commons during his last two miles of his memorial walk meant to bring awareness to and funds for pet cancer research. The walk, completed in honor of his dog, Malcolm, who died in 2006 of bone cancer, began on March 16, 2008 and ended in Boston, amid much media and public attention, on June 20. 2010.
Edgar, my agent, and I were just three of probably a hundred or so people whose lives have been permanently changed by cancer and who had walked those last miles. What a thrill it was to be a part of this cause that has re-interested, demanded that the veterinary community and its researchers pay more attention to cancer--not simply tolerate and mourn its presence.
I got involved with this cause during the research for my b0ok, THE CELEBRATED PET: HOW AMERICANS MEMORIALIZE THEIR ANIMAL FRIENDS. Early in 2008 I had learned of a guy who had lost his Great Pyrenees to cancer. He was embarking on a walk of over two thousand miles--in memory of him and to help eradicate the disease that took his life. I contacted him, interviewed him about a month before he was to set off on the walk with his other two Great Pyrenees, Hudson and Murphy, and wrote Malcolm's and Luke's story for my manuscript. And I became a follower of his cause, reading about his journey through the most long, grueling days, and, finally, walking the last two miles with him in Boston.
Many Americans have either read about or seen on TV this man devoted to the memory of Malcolm and his commitment to fighting this terrible disease that touches everyone of us during our lifetime. How noble a cause. I can't begin to understand the kind of determination it took to live through some of the trials he must have faced on the road. For someone lacking that degree of courage--someone such as myself, for example--such a feat is unimaginable: each day ending at a different location, friendly or not-so-friendly; safe or not-so-safe. Where would he be sleeping: by the side of a highway where, probability tells us, criminals and psychopaths have to be passing? How would he tend himself and his two big dogs on a daily basis? How would be carry all that food, his tent, his communications apparati, and products for hygiene? What problems along the road would threaten the walk, their lives, his sanity? What personal fears or obsessions would he have to face and overcome? I put myself in his place and shuddered. One thing alone would terrify me: bugs and ticks.
So much we all take for granted and would not be able or willing to do without on such an excursion: accessible, potable water for drinking and bathing, cooked food and lots of it, social gatherings with friends and family, leisure activities, simple acts like reading, snacking, sitting in a comfy chair, listening to favorite tunes, and just seeing to everyday comforts like cleanliness, temperature, general health, and ease of living. All of these became tentative, uncertain, undependable, and largely unexistent once Luke began his walk. Though he had a human support group via telephone keeping in touch and assisting him during life-threatening weather conditions, for the most part he sacrifced--for each day and hour of those two years--his own comfort and safety for the benefit of us all. That kind of selflessness probably none of us can imagine nor would be willing to tolerate even one-sixteenth of what Luke endured.
Had I undertaken such a trip, I would have had to lug such a large pack, or drag a sizeable wagon behind me--unable to do without my pillow, a personal toilet because I refuse to use the shoulder of a highway, my computer, a GPS, antacids, several changes of underwear and clothes, hats, sunglasses, sunscreen, a first aid kit, complete with a few cosmetics, bug spray, and a week's supply of donuts--to name just a few indisensable items I couldn't live without. And I would have been too lonely to have made it much past a week, despite the company of my cats. The first skin infection from a tick bite would have had me crying home for assistance, and I can't even imagine how I could have existed for two weeks without all the water I'd have needed for myself and my feline companions. And how in the world would I have carried all that food and cans of cat food with me?
What Luke accomplished is just unfathomable to me. What he sacrificed--incomprehensible. What he has done--generous, selfless--nothing less than heroic, for he conquered the odds for the sake of helping humanity and animals. Luke has helped us all because we've all been a victim of cancer in some way. Because of Luke's determination and ability to endure, he just may be the catalyst that will allow scientists to discover cancer's cause and, therefore, cure. Such strength of character must be recognized and praised.
Luke is a unique individual who continues to demonstrate the will and determination it takes to win the battle against cancer in animals and people, too. Check out his website at www.2dogs2000miles.org and donate to the cause, either by contributing your dog's DNA to the organization mentioned or by giving a monetary donation.
Thank you, Luke, for being a braver, bigger person than what I am.
Posted by Gay L. Balliet at 9:54 AM No comments: 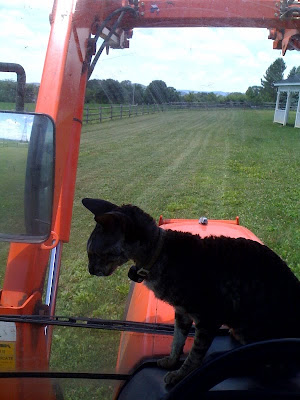 This is my Cornish Rex, Ricky, helping me mow Bo's pasture. Before the drought hit us here in eastern PA, we were mowing the horse pastures every week--thank goodness for the enclosed cab complete with air-conditioning and radio. Now the grass isn't growing, so mowing pastures has temporarily ceased.
Mowing grass is only one of the reasons why I haven't been writing on my blog. I had neck surgery to fuse two vertebrae, probably off-set on one of my five falls from my horse, The Bo-ster. The surgery set me back on a lot of yard work and my over-bearing garden, so when I finally recovered, I had to make up for lost time. Luckily, Farmer Rick was there to assist me.
Ricky truly is a weird cat--loves riding in my golf cart, rides at the front of the tractor cab, and is always up for adventures. In this picture he is wearing his summer collar, the transmitter that allows me to track him to the exact bush or mat of poison ivy where he is stalking a butterfly or shrew. Just a bit of information for pet lovers out there: www.petlocator.com sells tracking devices for pets, including cats. It's a handy tool when you can't find your dog or cat and can't spend a whole day searching every nook and cranny. I've been using my locator for years and can't be without it. It'll track an animal that has wandered about half a mile away, on average. It saves me a lot of time and, most of all, worry.
In addition to the surgery and catching up with chores that seems to be getting larger as we are getting older, Edgar and I drove up to Boston to walk the last two miles with Luke Robinson and his two Great Pyrenees, Hudson and Murphy. A trip to Cape Cod found us at Race Point Beach. Loads of sunbathers had gathered sand-side to soak up sun and balmy breezes, but only one crazed person was actually in the fifty-degree ocean: me. Yep, me--the only one bobbing, cringing with cold, in the waves. Edgar dutifully tried to accompany me into the sea. but when he got in up to his knees, he screamed bloody murder and yelled, "I can't stand it! I'm getting out!" And he raced back to the blanket. But I hadn't suffered a six hour drive not to enjoy my favorite summertime treat: jumping in the waves. So, I grit my teeth and went it--for at least a half hour. I provided entertainment for all the sane people lounging on the beach.
So, now that the yard work is caught up, I can be more faithful to my blog. Thanks for bearing with me and my tribulations.
Posted by Gay L. Balliet at 9:13 AM 2 comments:

It has taken me this long to get over the death of Purrl, re-named Rusty Purrl after we discovered that he was not a female, but a boy. In honor of my first raccoon, Rustle, I had re-christened him Rusty Purrl.
I was able to enjoy two weeks with Rusty Purrl, but all the while I detected that something just wasn't right about him. He walked goofy, knuckling over in the front and back feet. Then his symptoms progressed to the point that he lost his suck reflex. No matter how I tried to feed him, the KMR (milk replacer for kittens) came out his nose--the food was getting into his lungs. And while I was trying to feed him on June 3rd, his heart stopped.
I wish I had a good, happy, hearty story to tell you all about: how Rusty Purrl is climbing trees and trundling around the yard after me. I wish, more than anything, that I could have had that little raccoon to raise this summer and set free into the wild in September because raising a raccoon is nothing less than enthralling. I was given a very special opportunity, but things just didn't work out, despite our best efforts and best medicines.
Rusty Purrl died, probably from canine distemper transmitted in utero. But in the short time I had him, he made me realize how precious life is and how tenuous it is, too. In those two weeks, a tiny raccoon kit came to trust me enough to fall asleep in my arms. Though Rusty Purrl died, he gave me some very special moments, and I hope I was able to give him the same.
Posted by Gay L. Balliet at 3:32 PM 1 comment: