Buttons and Thread Tell a Story 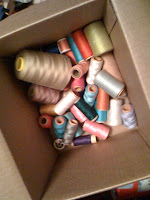 A few days ago I decided to de-clutter the extra bedroom that serves as my craft, gift-wrapping, and art room. I was trashing anything I hadn’t used in the past two years: oodles of fake rose buds and plastic vases I used for the graduation party for my Ph. D. Then I tossed a box full of leftover pieces of fabric for sewing my own dresses (yeah—do you believe that?), and I threw out some out-dated violin lesson books. Likewise, a movie projector and screen went to the dumpster as well as a bunch of ancient medicines and vitamin bottles.
Only a few hundred boxes remained for sifting when I discovered an older, medium-sized box. Inside, amongst a bunch of multi-colored spools of thread sat a small rectangular box. I opened it and gasped. It was a box of buttons—all different kinds—sitting amongst the thread: all from one of my Grandma Eckensberger’s dress factories. Forty-year-old buttons nestled amongst forty-year-old thread. A tear dribbled down my cheek: it was my Gramma who taught me how to sew.
The box of buttons and thread, uncannily, still had the odor distinctive of Grandma’s factories in Allentown, Pennsylvana—a smelly mélange of rolls and rolls of fabric, piles of lint, puddles of sewing machine oil, and clouds of steam from the pressing machines. The box oozed the essence of my childhood because I worked in my Grandma’s dress factory from the age of fourteen, along with all the women who ran the single-needle and merrow machines, the button fasteners, and the pressers, to the age of 21. I mastered a myriad of jobs, first as a finishing girl, one who trimmed the extra strings from the dresses. Then, after I proved my responsibility as a trim girl, I pinned the size and designer tags on the dresses along with bagging each in plastic. By the time I was 21 years old, I was an expert at the single-needle machine, which I learned to “drive” at the age of sixteen.
At that time my grandmother sat me down at one of the single-needle machines and showed me how to thread and untangle a clog of “cotton” under the foot plate. When she pressed the foot-pedal, the machine roared into action, the needle a mere blur as she expertly slid a long piece of fabric under the foot. Those factory sewing machines were monsters: tough, frenetic devourers of fabric and thread, monstrosities with insatiable appetites. The first time I stepped on the foot pedal that drove the needle, I thought it was going to suck my hand right with it, so fast it went. It was frightening for this teenager, but I’d be damned if it’d get the better of me.
But it did: twice. Two times I sewed my left thumb. And when the needle slammed into the bone of the digit, and the machine ground abruptly to a halt, I sat there, eyes wide: no pain--only shock and disbelief. My thumb sat there like a disembodied thing--skewered upon the needle. The lady at the machine next to me heard the loud “thuck!” and knew I had sewn my thumb. “Don’t move!” she warned. “Just take the wheel with you other hand and raise the needle out of your thumb.” And, at the age of sixteen, that’s exactly what I did—very deliberately, very carefully. Then, staring at the hole in my hand, I got up and went to the office for a band aid. I did finish working that day, even though by day’s end, my thumb was thumping.
I worked in my grandmother’s dress factory every summer through my college years. The women asked to start by seven in the morning so that they could be out of the building and in their gardens by three in the afternoon. These ladies were not much different from me—some needed the money for extras, some to live. I needed the job for extra cash and as a reminder. Much as I complained some days, my father always said, “Keep at it—you’ll appreciate your college education even more.” And I did: I didn’t want to be forever sitting in front of a machine for eight hours a day in a building where the fluorescent lights hummed drearily overhead. It wasn’t hard work; it was just endlessly boring.
And as much as the work was tiresome, I enjoyed the camaraderie of the women. They talked and sang to the radios blaring as the machines around them buzzed and roared—pulling, chewing the fabric through--gathering, stitching pieces together, basting, and hemming yards and yards of fabric. The women laughed and told jokes, sucking lifesavers and chewing gum as they directed the cloth beneath the needles. I remember having the utmost respect for the zipper setters. Most everyone was on piece-rate: the more pieces you did, the more money you made. But the zipper setters were the queens of the factory—could set a full zipper into a dress in less than three minutes. They did it perfectly. A zipper setter was considered an expert seamstress and made a good buck in the process.
These women weren’t simply workers to my grandmother. They were “her girls” as she often referred to them. She bought them sodas at lunch, and they brought her gifts from their kitchens. Gramma often joked and worked on the machines alongside them when one called in sick. She wasn’t simply their employer; she was their friend and partner in the skill of manufacturing beautiful clothing. At the end of the day after everyone had punched out, I would wait with Gramma until the truck came to take the day’s dresses to New York. And, finally, we got into the car and went home.

I looked at the buttons and spools of thread again. I stirred the buttons with my index finger: plain buttons, ones with crystal centers, metal ones. Once again the aroma of Gramma’s dress factory wafted into the air—even after forty years of storage.
And I wiped away another tear. Gramma was dead--since 1984. And it almost seemed that with her died the dress factories, too. Their skeletal remains are intact all over town: the empty factories sit vacant where once they had housed thriving dress factories. Over the years, our government and private enterprise have sent most factory jobs and others overseas--mostly to avoid the high cost of labor unions. I know from several conversations I had had with Gramma that the unions had drained her almost poor. And even though, years ago, I belonged to a teacher’s union, I felt strong-armed into joining. If a teacher didn’t belong, the union and its members ostracized him or her.
The buttons and thread spoke to me: What had happened to industrial America? Where were the factory jobs that anyone—high schoolers, college kids, middle-class men and women—could get thirty or forty years ago? Where had they all gone? And what part of the American soul had they taken with them? Today, workers hardly take pride in their work. So many don’t care; they just want to make the most money while expending the least amount of effort in the shortest time. And pride in one’s work is extinct, as well.
And what of the products we buy today? We know that stuff made in China is often of poor quality. We covet items—rare ones—that say, “Made in the USA.” Where have all the factories gone? And will we ever get back those jobs that embody the American work ethic and pride? The unions put the factories out of business, and by doing that, they put America out of business.

My Gramma was not rich, even though she owned several dress factories in her lifetime. She was a business woman, a hard worker, as were her “girls.” “Her girls” were the best ones in all the shops in Allentown, and she loved “her girls.”
I whisked away another tear as I stashed the box of buttons alongside the thread and put them on a high shelf. I would keep these—in remembrance—of Gramma and of America.
Posted by Gay L. Balliet at 6:21 PM