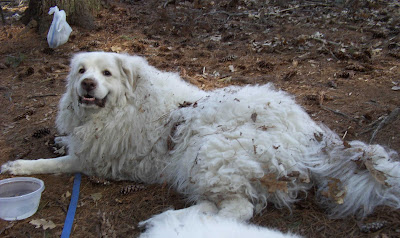 This excerpt is part one of four parts. For the next three days I will post here the continuing chapter I had written on Luke Robinson's dog, Malcolm. This chapter is from my enthralling manuscript, THE CELEBERATED PET: HOW AMERICANS MEMORIALIZE THEIR ANIMAL FRIENDS. Thank you for enjoying this chapter, and I would appreciate your all signing on as followers and adding comments. Thanks a lot. Now, here begins Malcolm's story. Thanks, Luke--you are tops.


“First and foremost, we go over the rules.”
Luke plopped the roly-poly snow-white puppy on the sofa. The Great Pyrenees sat upright on the cushions, his big paws balancing his body. He grinned, his long tongue hanging from the corner of his mouth, and sat at attention.
“I’m a man,” Luke said. He bent over, hands on hips, and stared into the puppy’s round eyes. “I do things a man’s way.” Immediately the pup lay down, his chin on his paws. He looked the man in the eye. His expression said, “Okay, I’ve got the point. You’ve got a macho issue going on here, but—hey--whatever. This looks like a pretty nice joint, and I’d like to stay.”
The six-foot, chisele-faced management consultant for hi-tech and bio-tech firms lived and worked by codes of organization and self-discipline, though his personality could be as laid back as a tugboat pilot’s. The businesses for which he consulted depended on his attention to detail; the scientists demanded precision and meticulous analysis of research and data. So, too, the pup would have to learn to live by house rules, and that meant men’s rules.
Luke hitched up his jeans and pulled up a chair. The pup sat up, his huge paws balancing his chubby body, and he opened his mouth in a wide yawn.
“So, that’s what you think, huh? Not taking this lecture too seriously? Anyway, as I told you, I’m a man.” The dog grinned, his long tongue falling out of his mouth then rolling up and around his pink, leathery lips. “Don’t expect me to fuss over you as a girl would. I repeat,” he said, a finger in the dog’s face, “This is man’s territory, and I’m not going to talk to you in baby talk, fuss over you, or treat you like a sissy.”
The pup smiled.
“As long as we understand each other, we’ll get along fine. I’ll show you the routine around here, and then we’ll go for a walk,” Luke said showing him the shiny red halter and lead. “Then we’ll come back and have some dinner. But don’t expect food from the table, and there will be no begging.
“You’ll only get dog food. I won’t give you a whole lot of special treats or anything—they’re not good for you. I buy organic dog food, and you’re going to eat that, even if you don’t like it at first.
“As for my bachelor pad, here—well, I like organization, and I expect you to be a good dog. If you’re a good dog and listen, we’ll be buddies, and you’ll have a nice home here.”
He took the puppy off the sofa, patted him on the head, kicked off his boat shoes, and went into the kitchen. Minutes later he walked back into the living room. He stopped dead. Shards of leather lay scattered around the living room. In the middle of the mess lay the puppy, bits of leather shoe lace protruding from his mouth.
“What are you doing!” Luke yelled, running for the toe section of one of the shoes. He held the shoe remnant to his chest. “These cost me a hundred bucks! The pup grinned, the heel of the shoe cupped between his front legs. “A hundred frickin’ dollars.” He flopped onto the couch, the mangled shoe dangling from his hand.

Luke’s job consulting with scientists and hi-tech businesses occupied most of his time, including weekends, but it allowed him a fairly affluent lifestyle, the kind most bachelors could appreciate: a fancy car, a house filled with modern leather furniture, plasma TV’s, and a surround-sound home theatre. Though he could only spend time with his new pup evenings, he hired a pet sitter to care for him during the day so that he wouldn’t be lonely, so that he had his meals on time, and so that he had regular exercise and some human companionship. And he told the sitter to keep the pup from devouring his leather Lazy Boy.
Luke lived with his brother in Castorville, Texas, in the Alsace-Lorraine district of San Antonio. He and Mark shared a ranchito of three acres complete with ducks, chickens, a couple of horses, and some sheep. Though the backyard was fenced in so that during the day the pup couldn’t wander into dangerous territory where ranchers and farmers guarded their livestock with guns, the land beyond stretched into long horse pastures, fields of soybeans, and flat prairie. Luke made it a habit to walk his pup every evening as the sun began to set, without fear of traffic and without dread of running out of space. In Texas a person and his dog could walk forever.
Every afternoon the pup took up his post by the front gate and waited for Luke. For hours the little fellow sat, passersby stopping to pat his head and talk. He watched as all the day’s workers scuttled home, hurrying along the sidewalk, speeding past in cars and trucks. With every hour the number of pedestrians dwindled until, finally, no more passed. Dusk fell, but the pup kept his vigil behind the front gate, never tiring, but only becoming more excited, knowing his reward was imminent: his dad would be taking him for a walk.
As dusk bathed the puppy in shadow, the pet sitter set his dinner in the grass, and he ate ravenously, as most puppies do. Then he sat back down, his face and ears turned toward the direction from which he knew Luke would be coming. Suddenly, his ears pricked. He heard that lovely sound, the quiet purring of his dad’s car.
“Hey, pup!” Luke called. He pulled into the driveway. “I’ll be right there.” He ran into the house to change into hiking boots. The pup galloped to the kitchen door. In minutes Luke flew from the house and attached the lead to the pup’s harness. All the while the puppy sat like a stoic. He was shivering with anticipation but contained his enthusiasm as a man’s dog should.
When they arrived at the river 45 minutes later, Luke stopped and squatted beside his puppy. “Okay, Bud. I know I’ve taken a long time to come up with just the right name for you, but a name is very important. I wasn’t going to make that decision rashly. I had to feel you out in order to choose the one that fits you best. I’ve thought long and hard about this, and Mark and I have come to a conclusion. Your name is going to be Malcolm—of Macbeth fame. What do you think?” The pup smiled, his tongue falling from his mouth, then curling around his lips. “You’re my dog. You deserve a royal name. And something manly, too. So, it’s Malcolm.”
Malcolm stared into Luke’s eyes and smiled, his lips stretched across his face.
Posted by Gay L. Balliet at 4:29 PM