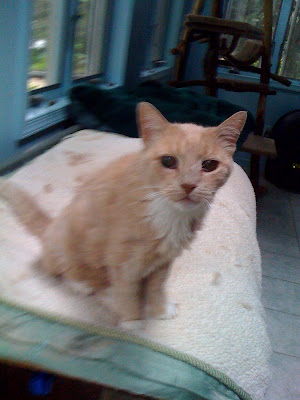 Many years ago when I was showing our plantation walking horses, Kenny, my cat, was my biggest supporter and riding critic. I'd come home after a day of teaching my eager high school students, quickly change into jeans, and head out to the barn to put in my daily training regimen in preparation for the up-coming weekend show.
Fancy and I would go through our practice paces, she flicking up her hooves in an almost perfect running walk, her head nodding with each step. The concentration coming from both of us was intense: if we had a good couple of laps around the ring, we could quit early. Ultimately, the goal was to get it right early on, not make mistakes that took a lot of correcting and, therefore, more effort and time. So, Fancy and I practiced turns, circles, stops, backing, and, most of all, squeezing out the largest overstride she could muster. Our workouts together were demanding for us both, but, if they went well, they were gratifying, too.
During these practice sessions I had only one admirer looking on: my teenaged kitten, Kenny. Every day after school when I headed out to the ring with Fancy saddled up beside me, he followed us from the barn. Then, he staked a look-out atop one of the fence posts. There he sat for as long as it took us to go through our riding routine: doing serpentines, large circles, cantering on the correct lead and coming to a dead stop, even executing a cross-canter, which a judge sometimes asked a rider to do. Whatever we did and however long we did it, Kenny watched, completely mesmerized. He sat on a fence post, no doubt evaluating, acting the part of the judge himself. I always wondered if he approved our efforts to perform the best running walk.
When Fancy and I rounded the curve past Kenny, he didn't shrink away, afraid we were going to run him over. No, he sat upright, his eyes drilling us and our exhibition. I secretly hoped he was liking what he saw because if he didn't, then it was likely the judge at that weekend's show wouldn't like what he saw either. Blasting past my attentive cat, I yelled from the saddle, "Hey, Kenny! Hey, Kenny! How're we doin'? Are we getting a foot and a half overstride?" Overstride was the length that the horse's back foot overstrode the mark made by the front foot while striding forward. A long overstride won a rider and horse major points at a show. But Kenny never said anything--just stared and evaluated our ride with silence. Evidently whatever he saw he was keeping to himself. I was performing for my cat, who, after watching us daily for all these months, had certainly developed a critical and discerning eye for good horsemanship. Another lap past my cat perched atop his post, and I hollared out, "Is this better, Kenny? It feels better! I really feel her rear end coming up under me." And Kenny sat stalwart on his post--no comment. But he was judging all the while.
When Fancy and I pulled into the center of the ring as we would do at a regular horse show, Kenny got off his fence post and came over--uncannily much like the judges do at the end of a class. But Kenny didn't have a paper and writing utensil in his paws. "What do you think, Ken-Man? Think we'll win this weekend? I think Fancy is doing an outstanding job, don't you?" And Kenny stood on the ground next to us, looked up, and meowed, which I interpreted as a resounding, "Yes!"
I got off Fancy, dropped the reins and reached down for Kenny, who, after I finished every ride, was accustomed to hopping into my arms for the walk back to the barn. Fancy walked freely beside me while Kenny draped himself along the length of my lower left arm, his chest cupped in my hand, his head facing away from me but in the direction we were walking, and his back legs draped over the side. In that quirky way he rode my arm back to the barn.
Kenny is very old now with some evidence that his kidneys aren't working real well. He's also losing his hair for some reason. But he's happy here on the farm and is living out his last years in comfort. Over the years he acquired many nicknames: "Kenny Man," which turned into a sing-songy, "Kenny May-an," which ultimately turned into a "Kenny May-o-nnaise." Yep, "Mayonnaise" was Kenny's middle name. Kenny still comes out to the riding ring to watch me, though Fancy died of old age last October and had been retired from riding for probably ten years before that. But Kenny still observes my equestrian skills on Bo and Lola. He's too large for me to carry him along my arm now, so he grudgingly walks back to the barn on his own.
Though he's not a youngster anymore, he's still my feline riding buddy, and I hope to enjoy his company a while longer as he sits ringside with those big cat eyes turned to slits--critiquing our ride, as ever.
Posted by Gay L. Balliet at 9:24 AM