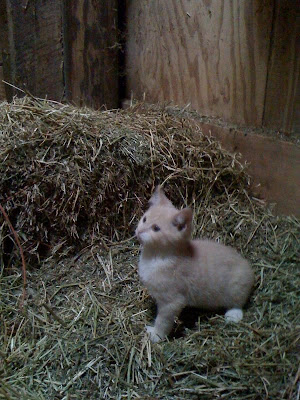 The other day when Edgar arrived at the veterinary clinic, he found a rather large cardboard box in front of the door. He got out of his truck, pried open the lid, and there sat a kitten. Beside the kitten was a dish filled with dry cat food as well as a bowl of water. And in the other corner was a capped bottle of water, just in case the kitten needed more--though I doubt he'd have been able to figure out how to unscrew the cap and pour it out. I guess the bottle was meant for the well-meaning souls at our clinic to give our adoptee more fluids when he became dry.
Anyway, our vet staff hauled the kitten and its box into the clinic and proceeded to medicate him for a snotty nose and fleas. He was given Fancy Feast and more water from his bottle and then put in a proper kennel in an area of the clinic where he could be entertained by the other clinic cats and where he could watch the goings-on of veterinary work. Later that day Edgar came home and told me someone had dropped off a kitten at the clinic. I was, of course, ecstatic even though the last thing I needed was to care for another animal, but I was a sucker for kittens. This one, Edgar said, was the color of Kenny--that beigey sort of color--like sand. "Buff" would be the proper term.
"Like Kenny?" I said, eager to meet our new addition.
"Yeah, just like Kenny," he said. "The girls have named him Felix."
"BOR-R-RING!"
"Yeah, well, " he admitted.
"He's now named "Kenny Junior," I announced. "This weekend when he's over his cold, I'll bring him up to our place so that he can meet the kittens we rescued from the Philly kill shelter. He's about the same age as they are. He needs someone to play with."
So, that weekend I brought little Kenny Junior up to our farm. He turned out to be a social butterfly, flying right over to one of the other kittens, and going nose-to-nose with him. At dinnertime, he ran over and pushed himself into the middle feline melee that forms when I put wet cat food on their plates. He was gobbling the food right alongside the others.
It's been a week since he has been here. One would never know, other than he is not black or gray, that he wasn't a brother to the four shelter kittens. They play and run over the hay bales as though they had never played before. And maybe he hadn't.
As I write this, I'm also contemplating the best middle name for Kenny Junior because "Junior" just doesn't cut it. I need to find something especially appropriate for his personality, and since he is flying around the place like a little rocket, I'm kind of thinking of a condiment that's spicey. Now old Kenny's middle name is "Mayonnaise," so what might I call kitten Kenny?
Let's see . . .. How 'bout "Kenny Adobo?" Naw, no music in that middle name. I have to be able to sing it, yell it. "Kenny Horseradish Balliet? Kenny Mustard Balliet? Kenny Cayenne Balliet? Kenny Jalapeno Balliet?"
I've got it!!!
"Kenny CHIPOTLE Balliet!"
Posted by Gay L. Balliet at 1:57 PM