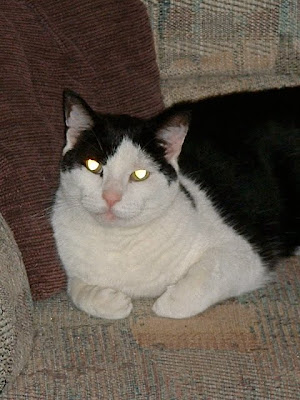 On August 12th, 2010, Patrick Steven PJ Landis, feline son of Terri and Steven Landis, died unexpectedly at the age of sixteen. This blog is written in tribute to this good cat--one purr-fect feline representative.

Brought home as a rescue only a month before Steve and Terri's wedding day, Patrick, a black and white kitten, beguiled, not only every human he met at the Landis' home, but also any other rescue cat brought to live alongside him.
Known as the "care-giver" in their family of felines, Patrick nurtured each new kitten, welcoming him or her into the only caring home they had ever known. Terri says, "Some of my other rescues had been abused, kicked around, and neglected, but Patrick took them under his paw. We called Patrick 'the greeter.'" From Terri's story, I could envision Patrick licking the new cat--stroking him or her along the ears with long, even tongue-massages until the nervous newcomer melted into a slavering lump of calm. Terri remarked that Patrick was unlike most cats: never threatening to others that may have been perceived him as competition. Instead, he cuddled alongside and freshened their coats to a silky sheen. "He was everyone's friend," Terri said.

I asked her whose cat he was. Terri replied, "He was our cat--he wasn't mine; he wasn't Steve's--he was Ours. Before Patrick came to live with is, Steve didn't like cats. But like any new husband out to impress, he let me have Patrick--an odd sort of marriage present. Only a few months after we had him, Steve--the cat-hater--suggested that perhaps Patrick needed another cat to keep him company. Patrick had transformed Steve into a cat afficionado. It didn't take long for Terri and Steve to offer Patrick a buddy. Because Patrick was such a good ambassador to the office of felinity, the Landises rescued many other needy cats.

So, when I spoke with Terri today, I learned many unique things about their much-missed cat named Patrick. I know him well after our conversation, and I recognize his generousness in many of my own cats as well, especially our Kenny Mayonnaise. Cats are all wonderful animals in each's special way, but Patrick exuded an extraordinary degree of acceptance-- indulgence--for which most of this species are not credited. His amiable and caring nature has rubbed off, after all these years, on the remaining Landis cats. He has nurtured them into mini-likenesses of himself.

Patrick Steven PJ Landis is gone but will not be easily forgotten. Certainly the Landises will never forget their friend and family member whose second middle name explains his specialness. "PJ" stands for "Pride and Joy."

You live on, Patrick--in our memories, in your feline brothers and sisters reflecting your tolerance.