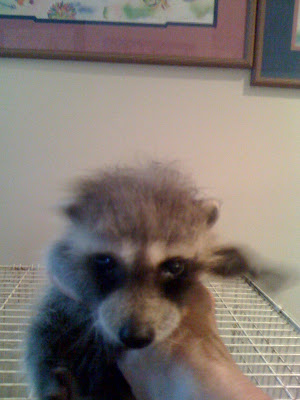 I rushed downstairs early this morning to check my raccoon kit.
He was sleeping soundly atop his towels. I was ecstatic to see that he had made it through the night. Perhaps we hadn't rescued him too late at all.
"Come on," I cooed. "You need your breakfast."
I put the titty bottle in the microwave as he crawled up to my neck, my other hand stabilizing his tiny butt. After thirty seconds, I took out the bottle and put the nipple to his lips. Though he didn't open his mouth on his own, the jaw moved with more suppleness--not as dried shut as last night. I pried open his mouth, inserted the nipple and squirted the fluid into his mouth. This time, the mouth opened and closed, almost as though he was trying to chew. I remembered that with Rustle, I squirted once and paused to let him swallow and get his bearings on being force-fed. Then, I squirted again and waited. It took a while to feed Rustle this way, but at least I hadn't overwhelmed him with the process.
Coffee in hand, Edgar came over to watch the nursing routine. I looked up and smiled grandly. He said, "Some birthday present, huh? You always said you wanted to raise another raccoon, and here you have him. Hey, we didn't check to see what sex it is." So, I held the kit while Edgar checked under the tail. "I believe we have a little female here."
"Oh," I said. "Well, then I can't call her ''Rustlelina' then. I've been thinking: let's name her Purrl, after Purrlicue (Purrlicue was our twenty-year-old cat that died last year). The kit was calling to us with not quite a purr but with more like a chirping, twittering sound, but it sort of sounded like a purr. But I'd like to honor Purrl, too, by naming this raccoon after her.
Edgar smiled. "Purrl it is." He watched me giving Purrl her bottle. "You're in heaven, aren't you. Well, again, you've got your work cut out for you. Looks like this is going to be The Summer of Purrl."
If it's anything like The Summer of Rustle, we're all in for a treat."
"You betcha!" I said.
Posted by Gay L. Balliet at 1:08 PM