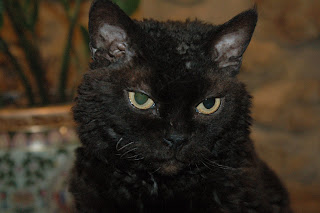 Here's golf cart Curly, our Selkirk rex cat. A rex cat has curly-coated fur. In a Cornish rex, the haircoat is short; in a Selkirk rex, the haircoat is longer. Curly sort of looks like a feline poodle. He loves speeding in the golf cart. He sits beside me, looking out at the woods, his nose pointed into the wind. I don't hold him or restraint him in any way. He truly loves his ride. But he does have a limit. After about a half hour of bumping around in the cart, he wants out. I think he gets nauseous if the ride is too long.
One time he and I were racing alongside Bo's pasture. At the end of the fence, I had to make a sharp left-hand turn. I kind of forgot about Curly sitting alongside me. When I swung the wheel to the left, we whipped around the corner, and Curly went flying right out of the cart into the soft alfalfa. I stopped the cart, backed up, apologized profusely, and Curly jumped back in. I always remember to take that corner slower now.
Posted by Gay L. Balliet at 9:59 AM