The snow and ice in the Northeast has been a bit more than annoying this winter, but it did help me out.  I became housebound for enough days to finish a book which I have written under a pseudonym and which won't be mentioned much until I get some guidance from my agent and publisher.  Yes, it is that good and that secretive.  It must remain unwhispered until I find out how to deal with some things inside its cover.

I also completed a handbook for potential and current miniature pig companions.  It's working title is THE COMPANION PIG.  I cranked it out in fewer than three months with the help of my friends and contributors Susan Magidson, Jeannie Watson, Dr. Arlen Wilbers, and, of course, my agent Diana Flegal.    Without them the book would have been rather skeletal.  But it is finished now, and it is in Diana's hands.  We shall see how enthusiastic the publishers will be for it, but I know there's a bunch of readers out there who are in desperate need of an all-inclusive book on how to care for piglets and adult pigs.  And I know, too, that lots of pig humans (I cannot call them "owners" because pigs do not allow themselves to be owned as dogs and cats do.) would appreciate a book that guides a reader on how to re-train an aggressive piggy.  THE COMPANION PIG attempts to do it all.

In the meantime I'm heading outside to muck horse stalls and probably fall on the jagged ice for the umpteenth time.  And if I have another creative idea spring into my mind, I will begin authoring another book.  At least that will be a safer journey than the one outside.

The picture posted here is by pet photographer, Dennis Gillette, who photographed my friend, Sheryl's pig, Pee-Wee a few years ago.  Pee-Wee is giving me one of his famous kisses. 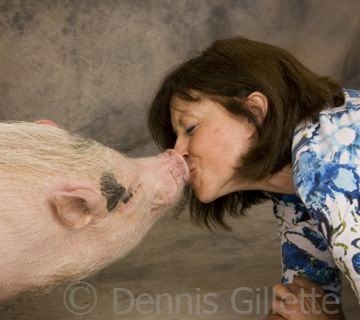