Faster than a Speeding Fly

I had just stepped out of the shower the other day and was drying off when I heard the buzz of a very large fly.  "Oh, no!" I thought.  "I sure don't want that loud thing bouncing off the walls of the bedroom all night."

I wrung my towel tight in a futile effort to snap it at him as he zoomed by, but I couldn't even follow his Airbus 350 body with my eyes, so quick and agile was he, let alone take him down with a towel.    As though high on Mountain Dew, the huge fly zoomed from one light to another, hitting the mirror, and I soon decided I could never target him with my damp towel.  He was just too lively.

My cat, Evie, sat on the floor, her eyes following the loud blowfly as he flew into the wall like a kamikaze, dashed to the next light, and sped, roaring, past my head.


Suddenly the fly made a fatal mistake.  Oblivious, he tore a path right past Evie.  I saw a paw as a blurred swipe, and, then, she pinned the pest to the floor with both paws.  I giggled into my towel.  Next, she hunkered down, carefully opening her paws, her face right over them, and sucked him into her mouth.

"Chomp, . . . chomp, . . . chomp."  Evie gulped twice, and the big and, apparently, fairly juicy snack disappeared down herSpeeding Fly feline hatch.  I cheered, and she just looked at me, nonplussed. 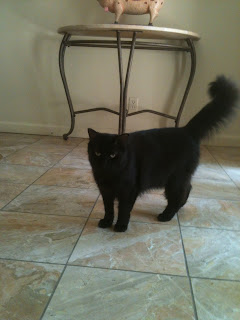 The moral of this story is "Cats are quick, and humans are very slow."
https://www.amazon.com/author/gayballiet
Posted by Gay L. Balliet at 11:26 AM