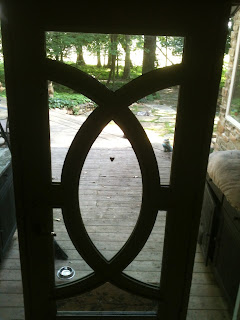 Do you see the little "heart" in the center of my front door?

When I came down the steps and saw this moth aligned so perfectly in the middle of that pane of glass, I truly marveled at the tiny creature.  I think he put himself there deliberately, intentionally, organizationally--right in the center in order to attract my attention.  He may even have been thinking and acting artistically, dare I say?

Whatever his motives or intentions, however, the sight of this centeredness of a moth struck me in a way that not much else ever does.  Could an insect with lesss than a pea brain possess enough self-consciousness to position him or herself just so on this window?  Was he trying to disguise himself from possible predators by looking deliberately placed, as though he were a part of the whole door and not a creature that could be swallowed up by a spider or bird?

Beats the hell out of me.

One thing I know: seeing the moth so strategically placed on the outside of my doorway made me appreciate the possibility of a moth having more than a brain the size of a pencil tip.  As well, I realized that art arises in so many different ways.  Yes, I do consider this finding a work of art--by Nature.  Others may not even have noticed the creature on my door, but I perceived its presence in so many different ways, another one of them being the possibility of a spirit of, possibly, my dead grandmother or grandparents, visiting me.  I know that's far-fetched, and I'm not really into spiritual happenings of this kind, but, after all, the moth does look like a heart, doesn't it?  My grandma Eckensberger would try to contact me in this way--through nature.