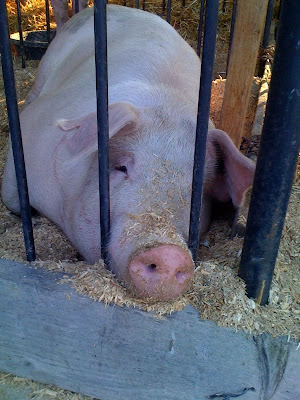 This chapter was pulled from my ms. THE CELEBRATED PET: HOW AMERICANS MEMORIALIZE THEIR ANIMAL FRIENDS because editors insisted a farm animal didn't qualify as a pet. I supposwe that's true but only because they've never been given the chance. The first two sections of this chapter are factual. The last two are factual as well but funny. I will post this chapter in aproximately four parts. Today is part one. I hope that all of you will look at your dinner plates with a bit more compassion and appreciation for the animal who sacrificed his or her life. And my personal request to all my friends is to refuse pig meat, as I have, out of respect for a species that humanity has treated with complete disregard. Thanks everyone.

Lost But Not Forgotten

Though this book pays tribute to the dear and beloved pets that share Americans’ lives, this chapter honors those animals processed by the small farms and the factory farms. While our dearest pets who have played with us, conversed with us in hard times, and slept beside us or in our laps, deserve special tribute at their passing, the farm animals are dispatched with little empathy, understanding, or caring by humans, let alone any remembrance of their having existed at all.
This chapter pays tribute to the millions of farm animals who are maltreated, abused and tortured on their way to the slaughterhouse: the 205 million pigs killed each year for American appetites; the steers; the dairy cows; the billions of fryer chickens and egg-laying hens, as well. Americans need to honor, too, the lambs, the veal calves, the ducks, the geese, the rabbits, and the goats, all who sacrifice themselves to our dinner plates. These animals, in their journey to the slaughter, race to define themselves within their doomed group. They find a part of themselves amongst each other because that had never been allowed the opportunity to show people how charming, endearing, and affectionate they could be.

Farm animals occupy a unique and frightening place within American society. As unique beings with blood pulsing warm in their veins, they breathe and react like humans, their specialness evident in the pure magic of life itself: the complexity of cells organized to operate bodily systems, and the innate divination of instinct and desire. When a calf and mother nuzzle each other, humans remark on the emotional depth of the maternal bond. When a pig squeals for help, onlookers marvel at his brothers and sisters who come running to assist. Like humans, farm animals have feelings and sensitivities that astute humans can recognize.
Though most farm animals are mass-bred, raised, and grown; each, given the opportunity, possesses a unique personality with quirks, needs, and a desire to live life as evolution defined him. The farm animal, despite the factory farms’ reducing him or her to anonymity, is an individual; each and every one is a character, though his number be “34712” or “58703.” The numbered tags hanging from a steer or pig’s ear mean nothing to him because as he lives his days, which are numbered as well, he tries, under the poorest circumstances, to communicate, play, and nuzzle other animals bearing identification tags just like his own. He knows nothing other than to be what he is—a feeling, sensitive, discerning, and gregarious individual. The farm animal is the truest representative of an existentialist because he defines himself as he knows himself to be, not as humans have defined him as an object destined for the human dinner plate.
Many Americans view farm animals, not as individuals with species-specific needs and goals, but as they wish to see them. From the human perspective their value lies, not in their companionship, not in the conversation they could have with us, if given the chance, but only in their relationship to our taste buds--for their presentation on dinner plates everywhere, everyday, every hour, every minute. A situation in which people view a living, breathing, sensitive animal as a commodity or a thing to be consumed is frightening, not only to a minority of humans, but more so, especially, to the animals who suffer by that blurred vision. If people cannot understand or fathom other values for a farm animal other than as a producer of sirloin or rib-eye steaks or chops, then we become devalued as the intelligent, sensitive beings we have historically defined ourselves as. Our limited understanding limits ourselves as a super species.
Among all the animals humans may associate themselves with, from domestic pets, to carriage horses, to zoo animals, to miniature farm animals that can share people’s laps and pillows, the farm animals are the most unselfish of all—sacrificing themselves for human appetite. From the day they are born in the factory farm or even in the rural farm their end point to the slaughterhouse and to our plates is, from the human perspective, their only value. Farmers, despite sharing fleeting moments of sensitivity and conversation with these animals as they grow and live alongside them, deny the animal’s personality, their reaching out for attention, and their need for touch. The farmers deny the feelings of the farm animals because to admit these gentle beasts have feelings and endure suffering that would make most of us cringe would be too shameful. Denying the suffering is avoiding it. Avoiding it dismisses the shame.
One farm animal who suffers terribly during her lifetime is the dairy cow. Unlike our domestic pets who bark and meow for treats and attention, the dairy cow seldom complains she would like more time than just a day to spend with her calf. Her calf, no sooner has she given birth and licked its face dry, is whisked away after the first twenty-four hours so that the milk, meant for her baby, can be drunk by people. Then, instead of her calf suckling on its mother’s soft udder as human babies suck at their mother’s breasts, the cow stands for hours, enduring the hard, metal edges of the vacuum-robot, a sucking machine powered by computers.
Yet the dairy cow endures, deprived of her newborn which all her instincts are urging her to find and protect. She does not complain, not because she doesn’t want to call out to her calf, but because it is discouraged by a stick, a shovel, or an electric fence. Neither does she look to the dairy farmer for attention--to be stroked on her head or scratched behind an ear--because she already has felt the human’s detachment, and she can feel the numbered tag in her ear.
The dairy cow, treated as a commodity the day she fell from her mother’s womb, has only the habitualness of her life to rely on: every year having her baby taken, producing ten times more milk than that intended for her calf, bearing the dull ache of an udder with mastitis, and hobbling lame to the milking stalls. Her only relative calm is being able to stand next to and touch the nose of the next cow as their udders are sucked dry. Only the ritual, the sureness of the daily suffering, the sucking out of the udder, offers the dairy cow a perverted feeling of dead calm. The tedious, demeaning routine of dairy life becomes the only balm in the cow’s world. And so each day repeats itself, practically, predictably, habitually, until when she has ruptured herself delivering her fifth calf, she is dragged off to the slaughterhouse.
Posted by Gay L. Balliet at 8:43 AM