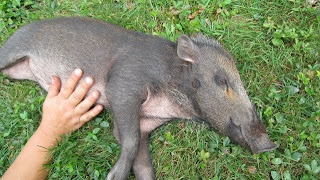 Pig people stick together. They sniff each other out, are simpy hog-wild for the company of other pig persons.
I am one of those people. I seek out others who appreciate porcine personality, porkish passion, and pig perspicacity.
We pig enthusiasts belong to a cult that admires flat noses resembling electrical outlets, sympathetic tendencies, and gourmands.
In my search for piggish people like myself, I have met and become friends with a wonderful, creative, fun pig person named Carol Eiswald of The Tusk and Bristle Farm in New York state. But Carol doesn't simply devote her energy to the more simple pet pig such as the pot-belly. She's a hard-core pig fanatic. She has as companions at least one bearded Borneo pig and--Ta-Ta-a-a!--a true, blue warthog named Suzy.
Suzy enjoys living outside when it's warm, and she is able to dig holes in the yard with her ample snout. In cold weather, however Suzy lives indoors with Carol. While she has her own quarters within Carol's home, she prefers to spend her afternoon snoozing between the sheets in Carol's bed.
I've received numerous emails over the past year from Carol--all describing stories about Suzy. Suzy the warthog can be a love-bug, a busy-body, a brute, a comedianne, and a perpetrator of naughty deeds.
My readers deserve to learn and see a bit of what one animal, a domesticated wild animal has up her tusk. So, with Carol's permission, I am posting pictures of Miss Suzy, Warthog of the Year.
Posted by Gay L. Balliet at 11:26 AM