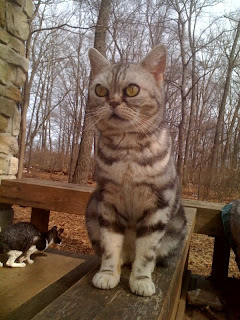 "C'mon, Pussies!" I yelled opening wide the front door. Elliot and Li'l Ralphie galloped to the threshold and put on the brakes as the cool, invigorating air whipped past their whiskers. The overwhelming smell-mix of moisture-laden ground with rich-crisp air joined the sounds of crows scolding cats beneath the birdfeeders. The forces of nature beckoned the kittens beyond the gates of their familiar home.

Elliot put one paw on the porch, Li'l Ralphie, cautious, right behind as if to say, "Go ahead, Elliot. Don't be afraid--just go; I'm right behind you." With trepidation and for the first time in their lives, they entered the great outdoors.

Cautiously the kittens strode in slo-mo across the deck. Lyla squeaked through the door opening, too, just before I closed it. Evelyn, however, more the homey type, just peeked outside and turned her back on it--not in the least impressed.

I wasn't going to let my kittens, with their first taste of the woods and the other cats, explore unattended, so I sat down on a step and observed them. Their unadulterated awe at the outside resembled kids upon discovering their first Christmas tree all adorned with glitter and gleam. The kittens' faces were rapt, fixed on all and everything at once. Once assured that I would stay--just in case they ran into trouble--they became more bold, running to the edge of the deck where beyond loomed three foot piles of snow and from which spread the struggling pachysandra beneath a stand of oak and hickory trees.

Lyla, however, had stopped in her paw-tracks, and for a moment I considered the world from Lyla's perception. She had, after all, eyes the size of golf balls--eyes so big and unblinking that she looked almost alien. Lyla's head swiveled from side to side taking in the clean air, the older cats relaxing on the sun-deck, me, the guardian, in my winter coat. Her face skimming the woods as an up periscope looking for enemy ships, she surveyed every detail around her. I wondered just how keenly Lyla saw this new world around her, for nature was as new to her as it was to the kittens; afterall, she had been rescued from a shelter in North Carolina and had been taken from an irresponsible breeder before that. She had probably never even seen a tree other than through a window.

I watched Lyla survey her surroundings as the kittens leaped onto the snowpile in front of the deck. They picked up their paws delicately, flicking the wet from their toes like beach-children throwing sand off their feet. While Lyla stared up a sixty-foot oak tree, I wondered how those eyes--giant marbles--playthings for a leviathan, interpreted those images to her brain. And suddenly I burped a laugh. Of course! Her eyes allowed her to see everything in high definition. I envisioned the idea: Lyla was seeing everything in extraodinary clearness--in high definition. When I told Edgar later that night how I was certain Lyla's vision had to be super clear, he laughed and said, "Okay. We'll call her Lyla HD from now on."

For over an hour and a half I guarded the kittens and Lyla as they explored the woods and stalked the older and wiser cats: Kenny, Little Eggie, and the Deans: Regular Dean, Spitty Bottle Dean, and S.S. Dean. Elliot acted the trail blazer while Li'l Ralphie followed, rarely letting himself out of brother Elliot's and my sight. Then Elliot suddenly erupted with a burst of speed, leaping over stumps and downed branches. His body lengthened as he galloped, soared, over the melting snow, past Kenny who was watching complacently, and over the old wooden bench. But his finale was yet to come.

This youngster of a Siamese, who had never before seen the light of the outdoors, suddenly transformed into a beast of the jungle. He raced, hunkered down, stream-lining himself, and then he leaped onto the side of a two-foot-in-diameter oak tree. And there he stuck like an arrow into its target. I hiccuped a giggle: Elliot was as shocked as I that he had run vertically, instead of horizontally.

"Wow! Good job!" I yelled to Elliot, still clinging to the side of the tree. "C'mon . . . come on down now before you get yourself to high and can't get down." He looked at the ground and climbed another four feet until he reached a branch. Then he sat pondering the earth beneath.

My fingers danced over my cell phone: for sure Edgar would have to get the tractor to extricate Elliot from his tree. But just as my call went out, Elliot began his descent, head first, claws and paws stretched out awkwardly before him.

I cringed. He wasn't coming down the right way! I couldn't let him fall over ten feet! "Elliot. Turn around and come down backwards," I yelled running, arms out-stretched. Of course, he couldn't understand me, but to my complete surprise he did turn around. Then first one back foot stepped down--he looked at the ground, surely estimating the distance--and then the other placed next to the other. "Okay, Elliot," I shouted. "Now the front feet!" But I didn't have to advise him; he had his first descent from Mount Evertree well under control.

I put the phone down, and as I did, Elliot plopped to the ground. I clapped and hooted my congratulations, and Elliot raced past me, a victory lap for sure.
Posted by Gay L. Balliet at 5:38 PM