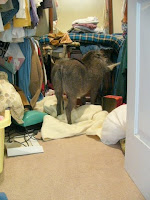 Those who do not share their homes with a warthog may just not understand that, as housekeepers, warthogs tend to have OCD--Obsessive Compulsive Disorder. My friend, Carol, of The Tusk and Bristle Pig Sanctuary, certainly can attest to the fact that warthogs fashion fastidious domiciles.
When Carol went outside a few days ago to feed her sanctuary pigs, Suzie the Warthog, who is living inside with Carol and her husband for the winter (Suzie's bristley coat is much too thin to keep her toasty outside in the winter elements), offered her housecleaning and organizational skills.
First, she sauntered into the bathroom, sniffing the edges of the toilet and sink with her keen nose--checking for any noxious odors. She stuck her head in the shower, gave it the sniff-test, and declared all satisfactory. The loo must have met Suzie's approval, for, in seconds. Suzie whipped right around and trotted furiously down the hallway toward Carol's closet--the clothes closet would stand the real inspection, for sure.
According to Suzie. Carol's closet needed a serious makeover, and no one was better equipped to handle the job than she, a fussy African warthog. She set to work with a vengeance, picking up a smelly, discarded sock and placing it inside a shoe, which she tossed under a chair. At the back of the immense, walk-in closet lay a couple of extra pillows, which Suzie easily dispatched to the middle of the floor--they would make a good bed after she had finished rearranging everything. And a blue-plaid work shirt definitely didn't belong hanging so high with its shirtails nearly touching the ground. That would have to become more easily accessible because workshirts needed to stay handy. So, Suzy pulled the shirt to the floor and nosed it alongside the pillows. Then she grabbed the next few shirts in the line-up and tore those off their hangars, too. There--that was better--one didn't need to stand on tip-toe to reach the shirts.
Suzie wasn't particularly discouraged by the chair taking up space in the closet. She rammed it with her hard head onto its side atop the pillows, and then turned to the cubbyholes holding stacks of neatly-folded jeans. They, too, would have to come down, Suzie decided--to a more easily accessible area of the room. Afterall, what was the sense of having a closet full of clothes if they were always out of reach?
In less than 45 minutes, Suzie had "organized" Carol's closet so that all the accessories--shoes, jewelry box, scarves, farm boots and other work clothes--became much handier. Silly humans--putting stuff so far out of reach.
Later that afternoon, after Carol had come in from doing chores, she noticed Suzie spread out, asleep in her leather chair. "Boy, Suzie," Carol laughed, "You think you had a rough day?"
Suzie's eye cracked open, she stretched, and yawned. Cleaning up a human's messy, unorganized closet was, indeed, tiring work, but sometimes a warthog just hds to do what she had to do.
Posted by Gay L. Balliet at 7:49 AM

Email ThisBlogThis!Share to TwitterShare to FacebookShare to Pinterest
Labels: Americans and their animals, farm pigs, people and animals, The Tusk and Bristle, warthogs