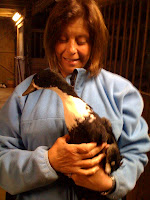 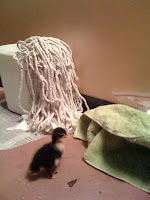 Oh Donnie boy, the pipes, the pipes are calling
From glen to glen, and down the mountain side
The summer's gone, and all the flowers are dying
'Tis you, 'tis you must go and I must bide.
But come ye back when summer's in the meadow
Or when the valley's hushed and white with snow'
'Tis I'll be here in sunshine or in shadow
Oh Donnie boy, oh Donnie boy, I love you so.
Donnie, the duckling we rescued over a month ago from the Walnutport Canal where, at one and a quarter ounces, he crouched alone and shivering at pathside, has grown into a very classy-looking duck. Though he doesn't resemble the standard mallard, we believe he may be a hybrid of a mallard and something else--possibly a diving duck of some kind.
Watching Donnie grow into duckhood was fun: in the beginning his beak color rivaled that of a bus. Now it is all a satiny black, a perfect match for his sleek, patent-leather feathers. His eyes are partially fringed with white, as is the top of his beak, and matches his white wing tips and white breast--a brilliant tuxedo duck.
Our duck is chic, except for his legs, which I always thought to be a bit thick. Even as a duckling, the sturdiest, most substantial part of him was his legs, out-fitted with the biggest, most orange feet the goddess could divine. He was a bruiser-baby.
Now Donnie is an adolescent, but he doesn't do any of the raucous things teenage boys do: drooling after females, fast driving, playing video games, and experimenting with booze and such. No. He seems to be a sensible guy, though he is obsessed with his swimming pool. Like a teenager, he doesn't want to associate with his human mom anymore. I remember when he swam after me in our swimming pool and when he ran after me through the house. No more--he's too cool for that now. Despite his more independent nature, his voice hasn't changed yet: he's still peeping even though I've been giving him quacking lessons. No one must know that I quack to him every morning while mucking horse stalls (he's living in the barn in an empty horse stall). Perhaps soon he'll catch on, but his ignorance in the quacking category is understandable considering he doesn't have any other ducks from which to learn the correct vocalizations. He literally doesn't know what a duck sounds like.
And for that reason and others I feel empathy for him. Edgar and I have been debating for some time whether to take him back to the Walnutport Canal and set him free. We both agree he needs to go back to the wild, but the question we're asking is "When?" If we take him now, will he know what to look for to eat since he only knows to find his sustenance in a little bowl beside his nest. On the canal there will be no bowls of duck food awaiting him. The biggest detraction from freeing him onto the Canal, however, is the onset of winter. Once the frost hits and the vegetation shrivels, what little plants and insects he may have learned to feed on will all be dead. I can't bear the thought of his starving to death.
So, for now and probably for the entire winter, Donnie will stay with us--unless he is offered a nice home with people who keep ducks as pets. I'm just worried that the longer he is protected, sheltered, and fed, the harder it will be for him to adjust to the wild in spring. Will his instincts allow him to search for appropriate food out there; will he know that fox and coy dogs are enemies and that he should fly away; will he even be able to fly once he tries? So many questions I have, but I cannot find many sure-proof, reassuring answers.
What I do know is that I have raised a rare, beautiful creature and that he will be safe and happy with us through the winter. In spring we're probably going to try to see safely into the wild--somewhere where predators are few. When the last of the snow has melted, we'll probably take Donnie to the Canal and allow him to walk away from us and toward the water he so loves. There he'll have other ducks to play with, to teach him to nibble on plant shoots emerging along the water's edge. I hope they'll be kind enough to take my ingenuous duck under their wings and teach him to be wary of predators and how to feed under water. I hope they'll teach him how to use his wings. And if they don't, I hope his real mother--Mother Nature--will give him hints on duck behavior, behavior that will allow him to live a long, fruitful life.
As Donnie's human mom I will dread and be glad when that day of freedom comes, just like a mom sending her kid off to college. Before we set him free, perhaps I will paint one of his sturdy legs with a ring of bright red nail polish so that when I visit him, I'll be able to pick my cadillac duck out of the avian crowd. And I wonder if he'll remember me. I wonder if he'll swim over to me and quack--not peep--a warm greeting.
Posted by Gay L. Balliet at 7:48 AM