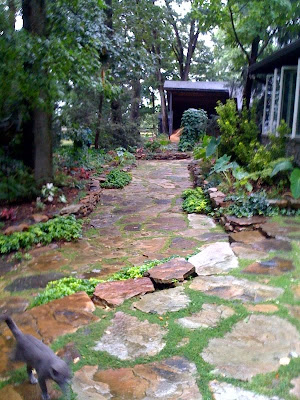 Those of us in the Mid-Atlantic states who have been suffering the recent drought have awakened, refreshed and positive, this morning.
It is raining.
I took a morning walk this morning in the light, but steady, drops, and though this picture really doesn't show the little puddles on our path, those pools, so familiar in spring and late fall, were like renewed acquaintances, like friends I hadn't appreciated enough in former times.
During the past few weeks of this drought, nature carried an edge, knife-sharp, on her shoulders: the landscape turned army-drab, the Irish moss scriveled and nearly disappeared, even the trees whose roots should have been deep enough to withstand the lack of water, were drooping, their leaves curled like an old woman's back. The viney plants in the vegetable garden languished, their octogonal leaves lolling like spent tongues from their stems: panting plants. My perenial garden looked stiff, with razor-sharp leaf-edges, and even the flower petals had frizzled. All the vegetation lay brutalized in the sun and scorched air.
My cats must have felt as alien as the landscape, too, for they lay out, legs spread apart--furry stars--on the desiccated walkway. When I passed by, they regarded me with irritation. And I patted one and said, "It's not my fault." The pigs disappeared into their pens to sleep away the drought--nothing outside in the grass worth snouting around for. All the worms, fresh grass shoots and other juicy delectables in the ground had either died or scriveled to nothing. There was nothing juicy anywhere--so a pig shouldn't waste her time looking. The horses, too, were miserable in the sun-under heat coming into full furnace by ten in the morning. So, each morning after their pasture breakfast, I brought them inside to their darkened stalls where the flies couldn't suck them drier than they already felt. On went the flock of fans, after which I hauled out the hay and filled water buckets to their rims. I winced even thinking about riding Bo and Lola in such heat. The horses and I glared at each other: the heat wasn't my fault. In such conditions I cared for our animals meticulously, yet I worried. I worried about all the creatures beyond my care.
The wildlife. How were the squirrels, the spiders, the deer, the ground hogs, the fox, and the other creatures of the field and forest coping and keeping themselves alive on this devil-designed stage? Things weren't right with nature in this extreme heat and desiccation: all seemed aggravated, on edge, nervous, jittery--all of which I could only quantify through my own instincts. I believed that the unease around me resulted from the heat's ultimate threat to creatures' survival.
But this morning's walk in the rain refreshed my spirit and cleansed my worry. With the rain trickling down my face, I could feel the relief--the immense sigh in the landscape and in the animals around me. A strange peace mist-coated the air, which before had been knife-sharp with every breath. The moist air softened the atmosphere, puffed up and filed down the edges of the dried-out echinacea petals. A graceful lace rain coverlet blanketed my stone pathway and the woods beyond--assuring nature's creatures and flora that she had, indeed, not deserted them.
Words cannot truly describe the immense rush pervading everything as the rain fell. This morning's rain brought the spiders back to life--daddy-long-leggers tramping back to work from a too-long, dusty rest beneath the wimpering weeds. The grass would need more time to regenerate, but already the elephant ears looked greener, fuller, stronger--bolder. And the change in the animals' demeanor was obvious. The cats, who ordinarily flee the lightest raindrop, ran out in the steady fall, danced and spun, darted after one another, and, realizing all was going to be okay, skipped back into the house out of the wet. The potbellies came from their houses and nosed the ground in search of bugs and grubs arriving to take part in the watery communion--all was not lost, all was not dead. The horses, too, neighed from their stalls--snorting, sniffing the wetness: asking to be let outside for a rainfall massage.
Joyful: all. I stood on the stone path, the raindrops scattering on my skin, and I smiled at the puddles forming on the stones. Not for a very long time will I curse rain. Rain is the life-blood of all living things. Rain renews, refreshes, cleans, restores. And it soothes the physical and emotional self unlike any substance.
Yes, indeed: rain soothes the souls.
Posted by Gay L. Balliet at 11:14 AM