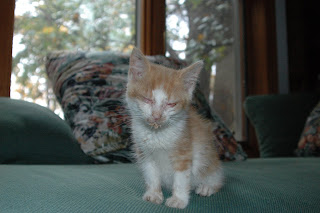 Our bellies filled with a sumptuous outdoor lunch of smoked chicken wings and baked potatoes, we drove towards home on one of the last beautiful, sunshine-filled days of autumn. What a difference from the day before when our rain gauge reported an inch and a half of rain.

Going 50 mph on the main drag towards home, I saw something sitting by the side of the road, but the form didn't register with my brain as the typical groundhog or possum. Suddenly I knew what it was, and then a second image flooded my brain: a paw stepping out onto the road. "TURN AROUND!" I yelled to Edgar. "HURRY! Turn around! There's a kitten by the side of the road!"

Edgar whipped the SUV around in a cut-out alongside the highway and pulled out just as a school bus came charging up behind us. "Where is it?" Edgar said, peering ahead, his knuckles white on the steering wheel.

"Where is it?" Edgar repeated.

And then we saw the kitten--an orange one the size of a Campbell soup can--crouched in the middle of our lane of traffic. "THERE! RIGHT THERE! PUT ON THE FOUR-WAYS. STOP!"

Even before Edgar had brought the car to a complete halt, I was out the door and running. Cars zipped past us in the other lane, and the kitten turned away from the whoosh of the traffic-wind. I called to the kitten, and it slowly turned toward me, its face a mass of crusticles and snot. Surely it couldn't see where it was walking. I scooped the creature into my arms, turned, and ran back to the car.

Back in the car I held the tiny creature against my chest, plucked a Kleenex, and began pulling the pus-scabs from around the kitten's swollen-red eyes. The nose, too, was concreted shut with dried snot. He must've known he was in kind hands because he let me pull all that junk from his fur without any fussing. Then, as we headed down the road, I noticed a quarter-sized scab dried on his fur. I scraped at that with a fingernail, and it opened up, allowing a river of pus to run down his side--an abscess. I caught the pus with another Kleenex, and a fleeting thought passed as to whether my cashmere sweater was also catching any of the nasty fluids. But the sweater didn't concern me much All that mattered was the kitten's welfare and comfort.

As we drove toward home, I held the trembling kitten against me. Though he was safe now in my hands, I broke down into tears. How many other kittens are disposed of so violently, so nonchalantly by people who have no sense of responsibility, no sense of charity or empathy for an animal that can't care for itself? I cried because of our unfathomable inhumanity, our crass egoism that values cell phones and blackberries more than creatures that can feel pain and misery. I cried because the little creature in my lap didn't deserve being discarded like some piece of trash. I cried because, had we not rescued him in that perfect split-second, the school bus would have pulverized him for sure. I cried because luck and good timing had been on the side of this kitten but that luck and good timing usually didn't benefit most creatures cast off by heartless people. Most creature-trash succumbed by the side of the road.

That was yesterday afternoon.

This morning, after an evening of intensive nursing, antibiotics, ophthalmic treatments, and nutritious food, Li'l Ralphie, named in honor of Ralphie, one of our barn cats who died about a month ago from old age, came running to me from the garden room: one eye wide open, the other half shut with more dried pus. He squeaked at me but suddenly fell quiet--his feline enthusiasm interrupted by a fit of wheezing and sneezing. But he was happy, and he was grateful to be alive. And I was just as ecstatic for him and for me.
Posted by Gay L. Balliet at 9:25 AM