More on The Big Flapper 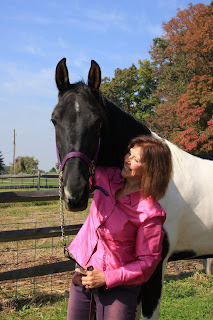 So, the other night I walked into the barn to check the horses one more time before turning in myself. I looked in Bo's stall--nada. There was no horse there. How could such a big horse not be visible in a 12 by 12 foot enclosure?

Bo, otherwise known as The Big Flapper because he wakes us up whinnying every morning, was lying down in his stall. He was resting.

For a horse that probably exceeds 16.2 hands, only a rare moment allows me to be taller than he. Most always I have trouble clipping his ears, dressing him in his bridle, or even seeing over his back--he's THAT big. But this night would be different:I'd tower over him for a change.

Quietly, carefully, I opened his stall door. He was lying sternal (on his chest, not on his side), and his head was only a few feet from the entrance. I squatted down, so that he wouldn't be alarmed by a person looming over him, and duck-walked to him, talking in a soft voice.

His big eyeball had me in its sight, but it wasn't fearful. "Bo-Bo. Are you sleeping?" I cooed. The eye stared.

I stroked his face, neck, and withers, all the while speaking in soft tones. I was amazed by the animal's mass as I soothed him all over--so much strength, so much power temporarily on hold by sleep.

The eye blinked, and then I took advantage. I wrapped my arms loosely around his neck in a huge horse hug. He turned and nuzzled my leg. I held his face close, his warm, moist breath, and I whispered lovey things in his ear. He listened with much intent, swallowed, and slid his nose along my leg again--acceptance.

What a totally different and wonderful moment I had with Bo, who was, no doubt, somewhat tranquilized by the curtain of sleep. With no hint of annoyance that I had disturbed his sleep, he almost seemed to enjoy my cradling him in my arms--a rare and poignant moment between a horse and his human. And, for once, I was larger than he. This usually spirited powerhouse of an animal seemed diminutive, tender, in his resting position. This was a side of Bo that I had never known or realized: my horse of Lilliput, my horse of sweet softness--Cotton Candy Bo.
Posted by Gay L. Balliet at 3:39 PM